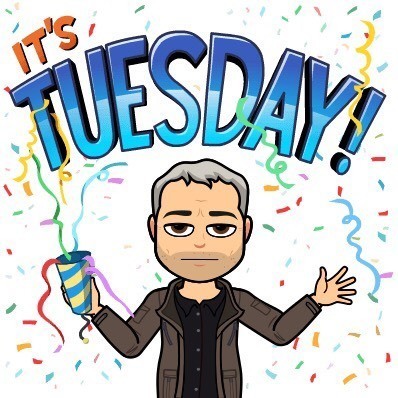 This post ain’t gonna have a whole shit beans worth to do with my Bitmoji’s indifference to Tuesday. Lol, his expression says he’s not overly excited but let’s party because it’s Tuesday.
The part you don’t see is the fact that he has no pants on. That expression makes more sense if you know he’s not wearing pants.
Me, my Bitmoji, and supermodels are all alike in that regard, btw. Ie, not really seeing a need to wear pants like ever. We’re not huge fans of winter. Plus we all have really nice legs and how are we supposed to show off our sexy gams when they’re covered with stupid pantalones.
Another lifetime ago when I had “Nick’s Subservient Cam” where strangers on the web would drop by and force me to do silly stuff there used to be this one dude who would come by and tell me I was “the pants!” He’d be like “that’s SO funny, dude! You’re THE PANTS!!” 😂😂😂 I still LOVE that guy to this day and I have no earthly idea who he was.
So the moral of the story is that while I don’t necessarily like to wear pants if you CALL me “the pants” I’ll love you forever.
YOU’RE THE PANTZZZZZZ!!!!! 🙌 👖 🤷‍♂️😆
--
Nick Druga II
http://nicksilly.com/
469-600-9448 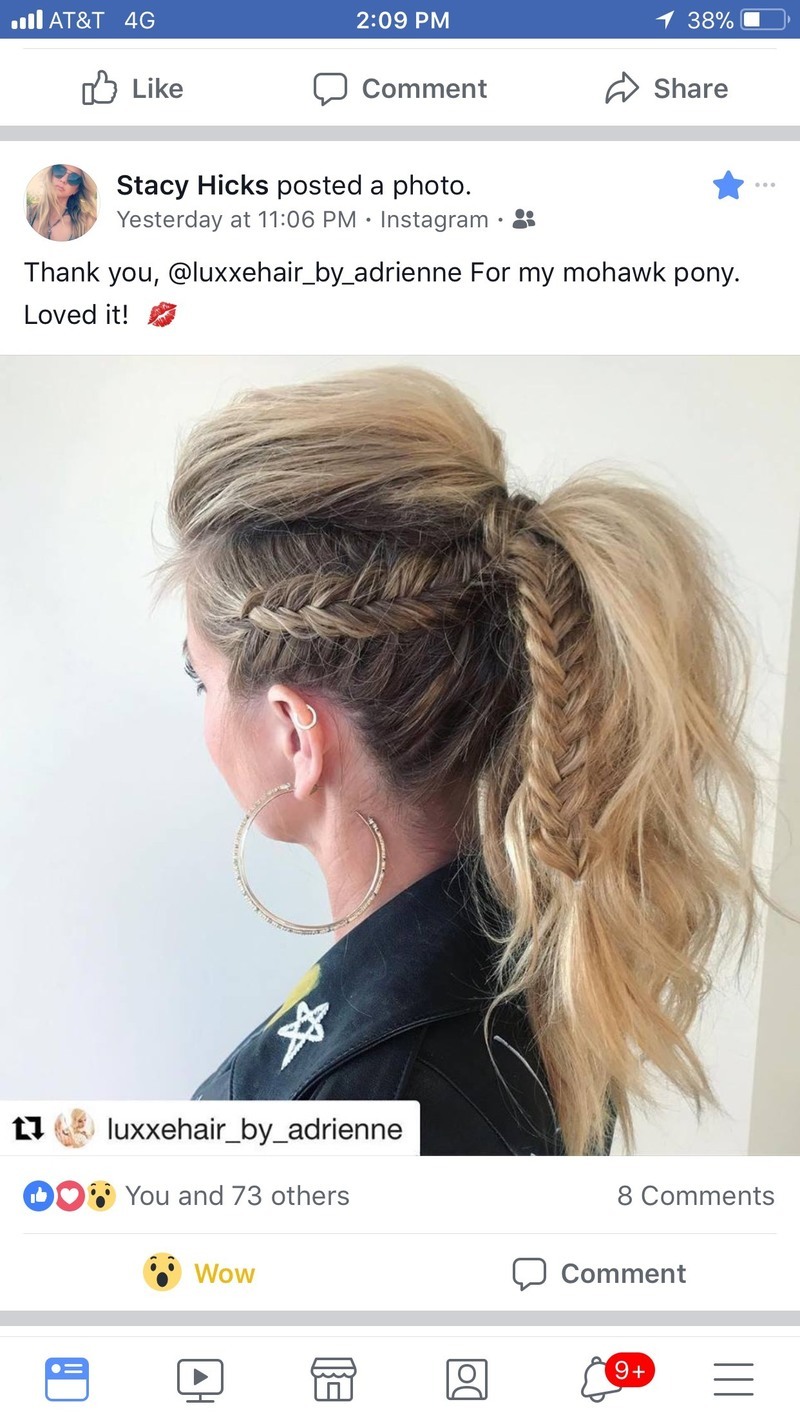 February 19,2018
This post is not gonna have much to do with Stalo’s rockin hair except to say that I should maybe open up Facebook more often to see what my peoples are up to. Every time I do it’s always fun and I say to myself “I should keep up with people more” and then I go on about my life of not keeping up with anyone. Lol.
I guess I’ve just always been more of a leader than a follower and it’s hard to do both. I COULD do both but there’s also the problem of laziness.
If you’re not as lazy as me and want to write a book I have a suggestion for the title. Put the word “whore” in it. People will buy a book with whore in the title regardless of the content. But don’t call it “Confessions of a Whore” or some bullshit like that because even though I’m sure you ARE a whore, you can still be more creative than that.
Good luck with your book! Hit me up if you want me to do the Audible version. I have a very soothing voice. 😊
--
Nick Druga II
http://nicksilly.com/
469-600-9448 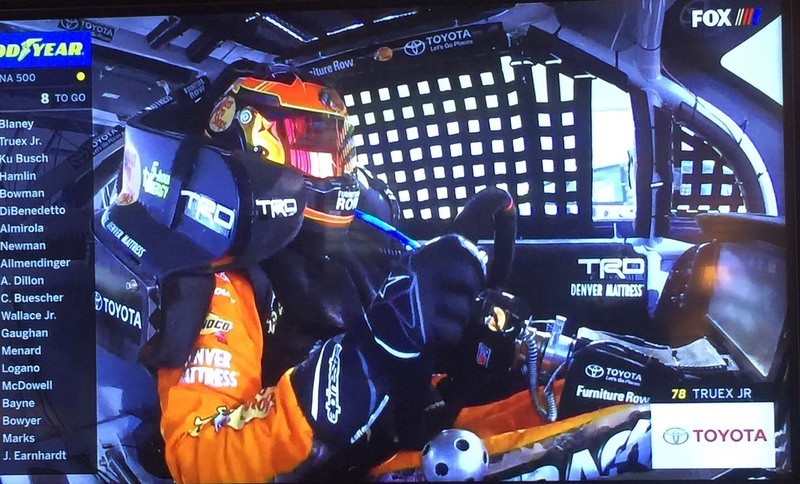 February 18th, 2018
This post is not gonna have much to do with one of the two Toyota NASCAR drivers I support. The other one is Kyle Busch. Neither did so well today but as long as the two Ford drivers and two Chevy drivers my other two friends root for also lost it doesn’t matter. Nobody has Austin Dillon so after one race we’re all tied at zero.
Did you see my Instagram post of the blue jay today? You wouldn’t think north Texas would be the best place to find cool birds but I’ve seen excellent cardinal and blue jay specimens over the years. I’m NickSilly1 on IG if you wanna follow me there, btw.
Since I’ve started blogging every day I don’t post nearly as often as I used to on Instagram. It used to be almost all most posts started out as an IG post and then got sent to FB, Twitter, etc. automagically.
But now my posts start out as a blog and get sent to FB and Twitter automatically but not Instagram because IG doesn’t let you do that. So basically my IG followers are in the dark. This irks me a little because I like my IG followers and maybe they might like to read some of the nonsense I post. But then again, they’re also being saved from wasting their time on my inane ramblings.
I’m going to lose a lot more sleep about this until I figure out a solution that keeps everyone in the loop but not tonight because I took some NyQuil and that shit knocks me out every time. 😴 😴😴
Sweet dreams, see ya tamale. 💤
--
Nick Druga II
http://nicksilly.com/
469-600-9448 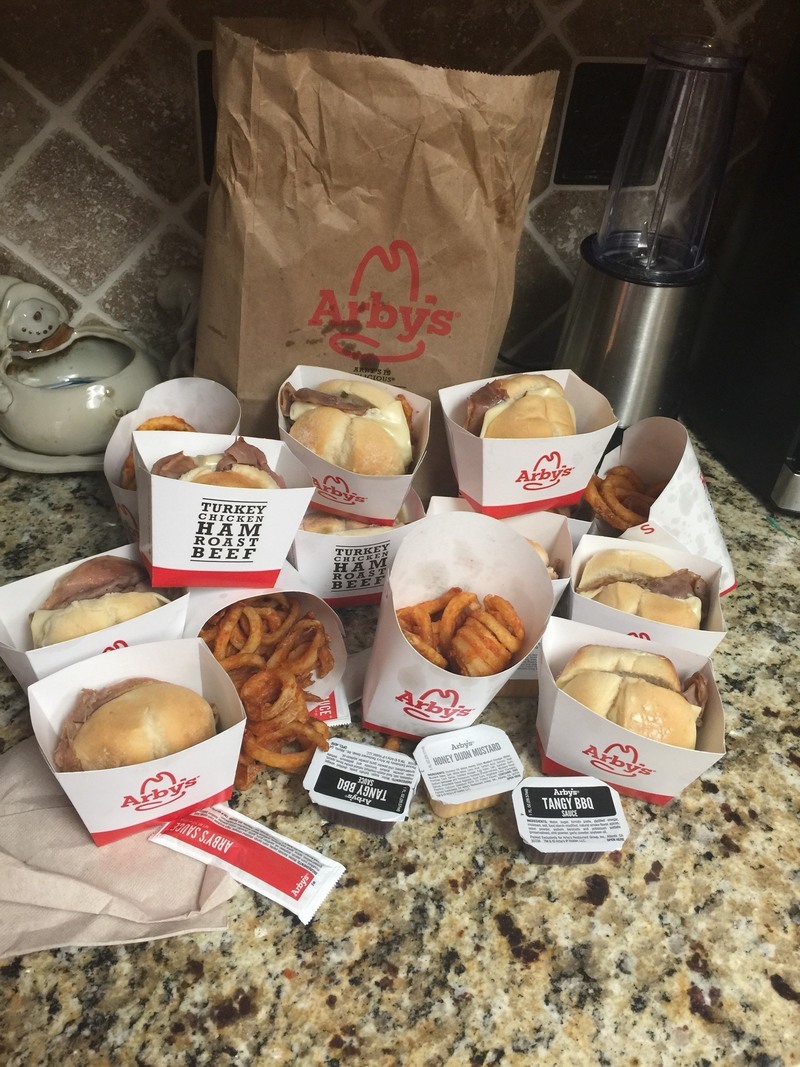 February 17, 2018
This post might have a little to do with Arby’s happy hour from 2-5 EVERY DAY where you can get sliders for a buck!
If you haven’t had sliders from Arby’s yet A, I’m a little disappointed because I thought I knew you but B, get off your butt and go try some when they’re just a buck. They added a jalapeño slider which is nice for those of us who like to spice it up.
Ok, I’m off to go get another 6-pack of phone chargers. Keep it fake. 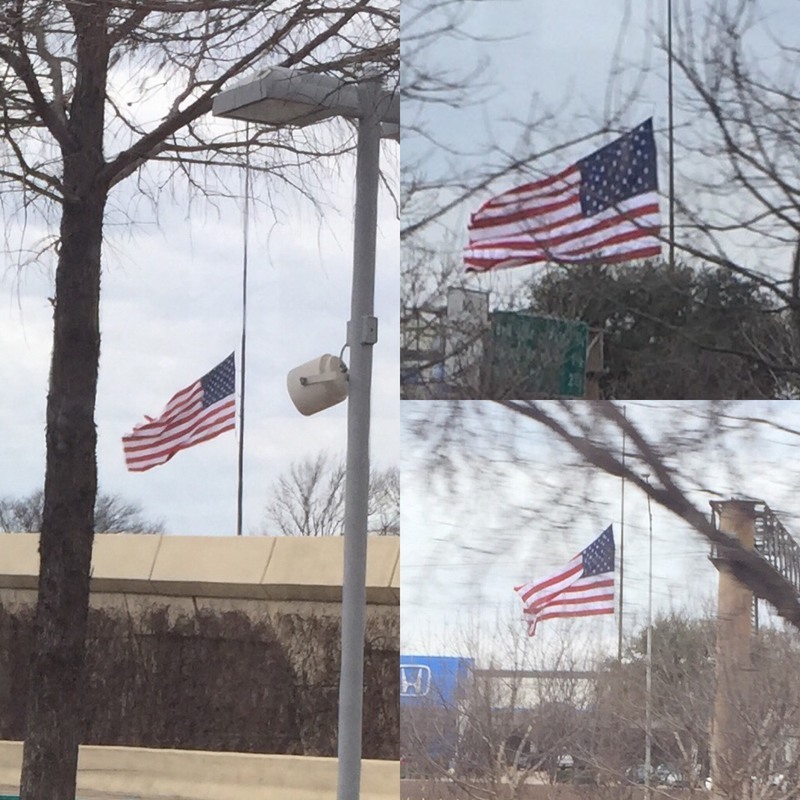 Friday, February 16, 2018
We may as well fly flags at half mast every damn day because every damn day another senseless tragedy happens. And if nothing terrible happened today it’s likely something terrible happened on this day in the past. “What, you’re flying your flag at full mast when that those 22 U.S. exchange students drove off a cliff in Ghana 23 years ago today?!? Have you no soul?!?”
I predict the last day we’ll ever see a flag flying at full mast will be July 2nd of the year where a terrible tragedy happens on July 3rd  and forces the nation to fly flags at half mast on July 4th, the ONE day of th year when America is supposed to proudly fly its flag the highest.
I say we fly the flag at FULL mast every day regardless of the events of the past with the understanding that we ALL sympathize and are compassionate towards any and all who have died in the past for no good reason and in no way does the high flying flag DISrespect those people but in every way it shows how resilient we are as a nation and how we celebrate life! 🇺🇸 🇺🇸 🇺🇸 🇺🇸 🇺🇸 🇺🇸 🇺🇸 🇺🇸 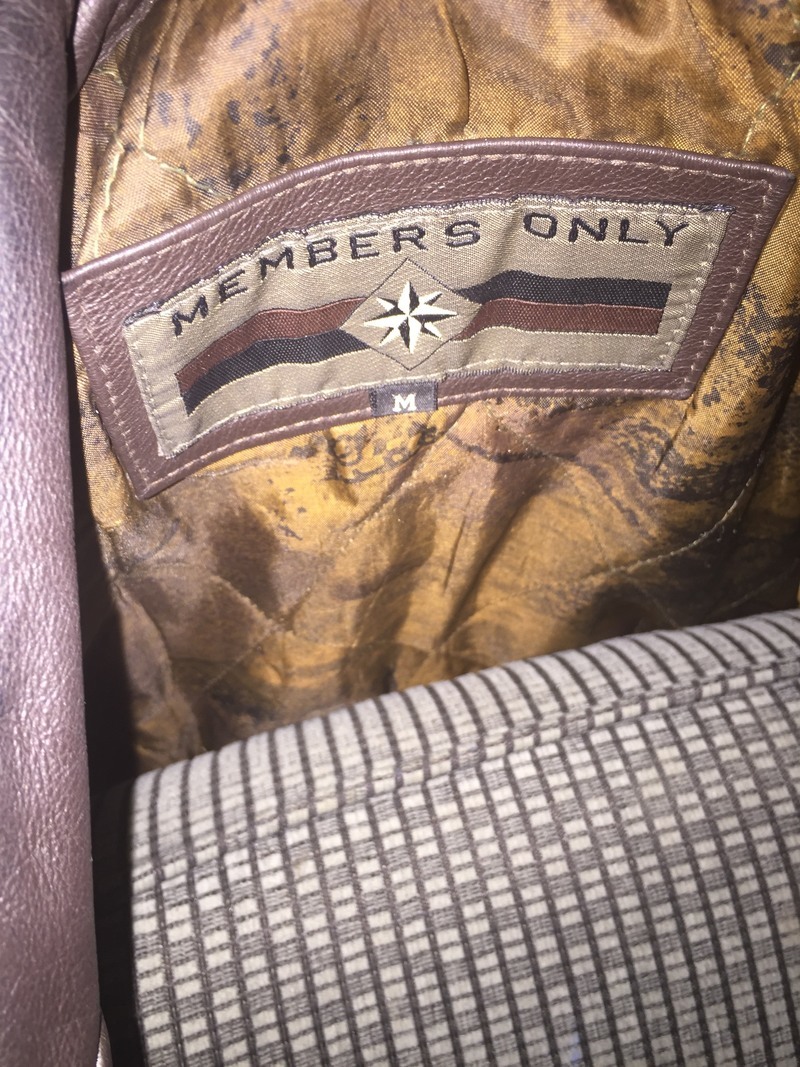 February 15, 2018
This post is not gonna have much to do with my Members Only jacket that doesn’t have the logo on the outside pocket like you remember or I wouldn’t wear it.
Hey, here’s some news. I have a cold. It’s news because I rarely get sick. This is a particularly lame one. I’m just a little congested and feel like I’m almost over it already and it just came on yesterday. I ate a couple big oranges 🍊 🍊 and they kicked its ass I guess. Good job, oranges!
So are you gonna quit your job tomorrow? I don’t blame ya, Friday’s are good days to burn some bridges. They’re gonna miss you at your old job but they’ll live. Congrats on your new career! Good luck! 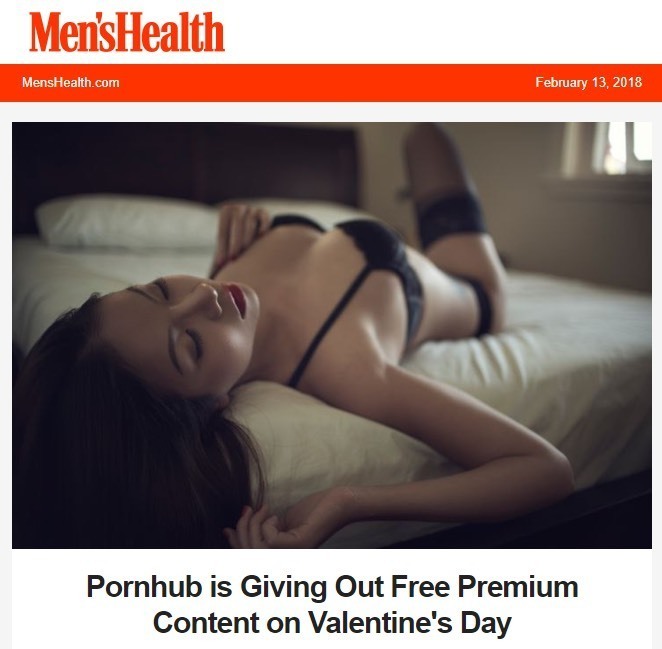 February 14, 2018
This post is not gonna have much to do with Pornhub giving out free content (#bandwidthtest) but God Bless em right?!? 👍🙌😛
This post WILL have to do with something I’ve believed for a LONG time which is that sex is good for your health. It’s an undeniable fact but here’s the part that’s interesting. Women (not men) are MORE attuned to this.
The prevailing opinion that all men think about is sex is not completely untrue but look at the cover of any issue of Cosmopolitan magazine and you’ll find WAY more teasers about sex than you will your standard issue of Maxim. Maxim’s have a sexy chica on the cover but so do Cosmos. It would lead one to believe the only thing WOMEN ever think about is sex.
The difference between us is that women enjoy the mental game whereas men are more physical which is why women are more attracted to the men willing to play the games but let’s not get too psychological.
The part of the whole men and women sexual thing where God used to get most of her laughs was men peaking in their teens and women in their 30’s, but NOW she has even MORE to chuckle about because these days more men in their 20’s and 30’s seem to be concerning themselves with other aspects of life while women are still just as obsessed with sex and relationships as they’ve ever been.
The bottom line is that differences between the sexes are always gonna be evolving and interesting and cheers to that! ✌️❤️😘 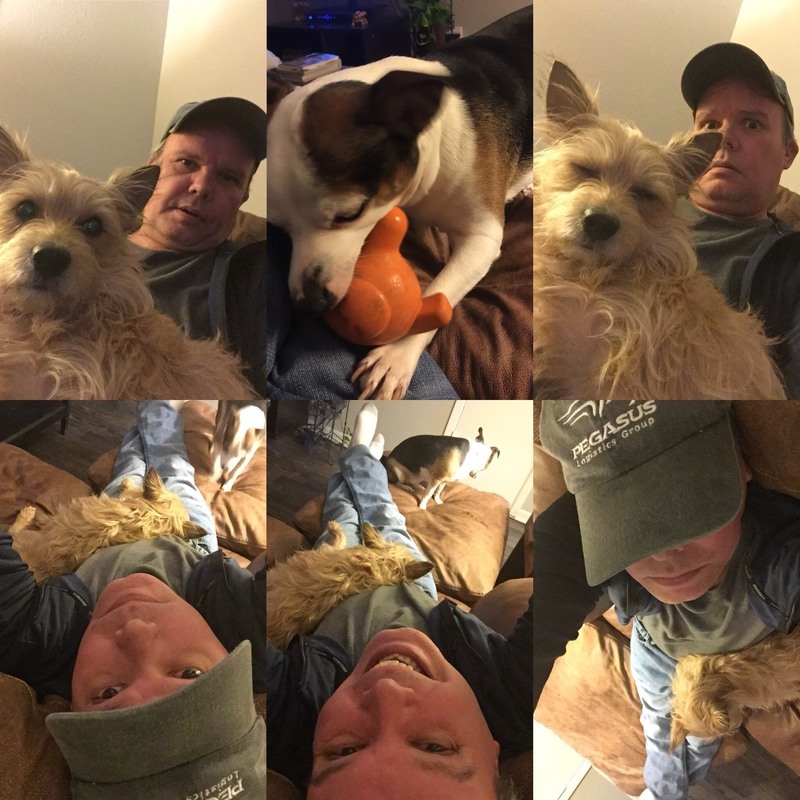 February 13, 2018
This post is not gonna have much to do with the dogs who rarely leave me unaccompanied on the couch.
Hey it’s Fat Tuesday! I forgot already. Plus I’m not NEARLY as fat as I should or could be so I’m embarrassed by my relatively in shape body. 😬
Remember that one Fat Tuesday when Jennifer saw you at the creole festival in Ballion Park? And you were like “hide me, quick!” And I was like “from what?!?” And you were like “Not what, who!!! Jennifer!!” So I tried my best to hide you but Jennifer  still saw you and ran over and threw her Cajun pasta all over you? LOL! That was classic!
Let’s do Ballion Park again next year, fucker! Sweet! 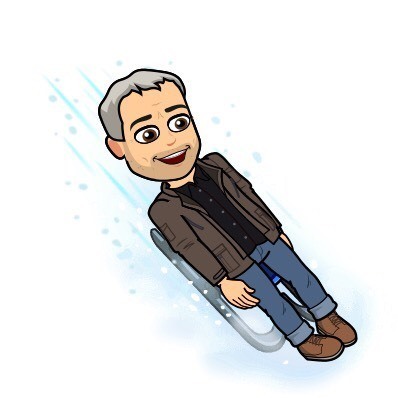 February 12th, 2018
This post is not gonna have much to do with Bitmoji Nick forgetting to change into more appropriate luge attire before sliding down and finishing in last place by a large margin. 🙄🤷‍♂️
Yesterday I posted twice and both had the wrong date on them. Doh! Thanks for not pointing out I’m not perfect. Because I wouldn’t believe you anyway. 😜
I had this great idea of a post where the pic would be me stuffing my face ahead of Fat Tuesday to make sure I was as fat as I could be tomorrow. But I guess it’s too late now. Oh well. Remind me to do it next year.
Have a great Mardi Gras, Penelope! 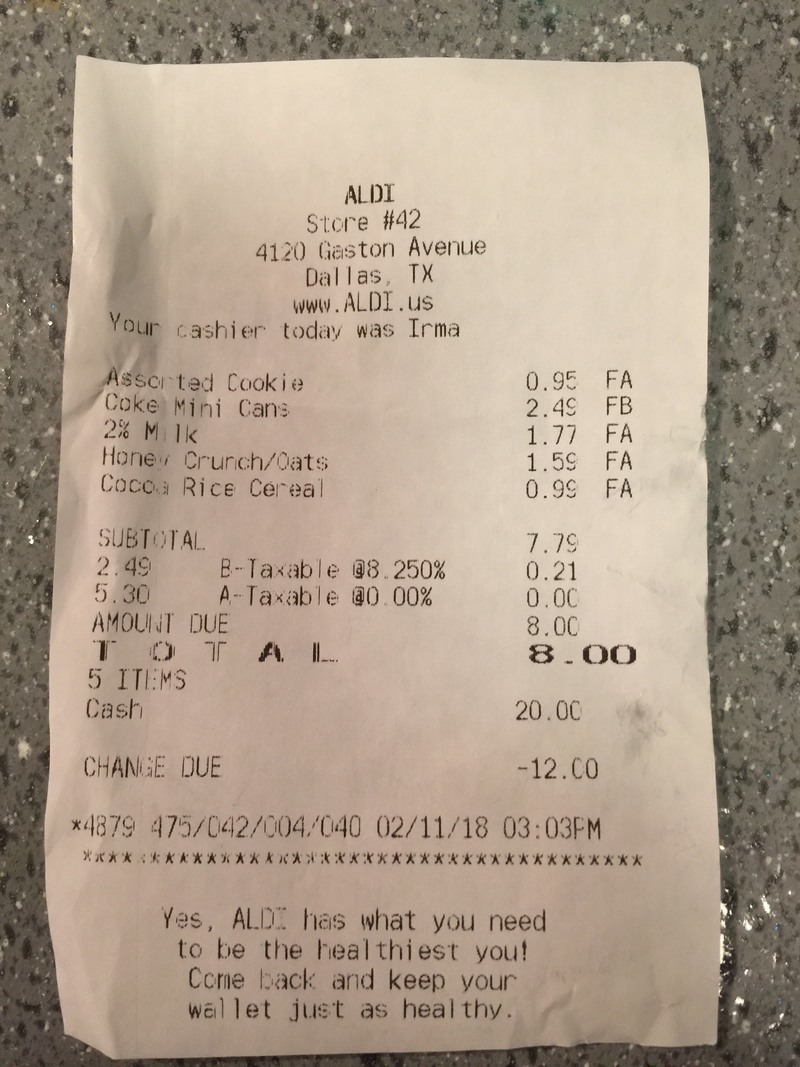 February 11, 2018
This post is not gonna have much to do with my Aldi receipt except to say I love it when the total comes to an even dollar amount.
If you’re wondering what kind of cookies  I got they’re oatmeal raisin. Duh.
Today is Bruno’s birthday! Happy Birthday, nephew! I have zero memory of when I turned 10 but I’m sure it was a good day because mom and dad always made our birthdays special.
When it’s YOUR birthday I’ll give you an oatmeal cookie! Nice!

Nick Druga is a silly man.
Browse the Archive »