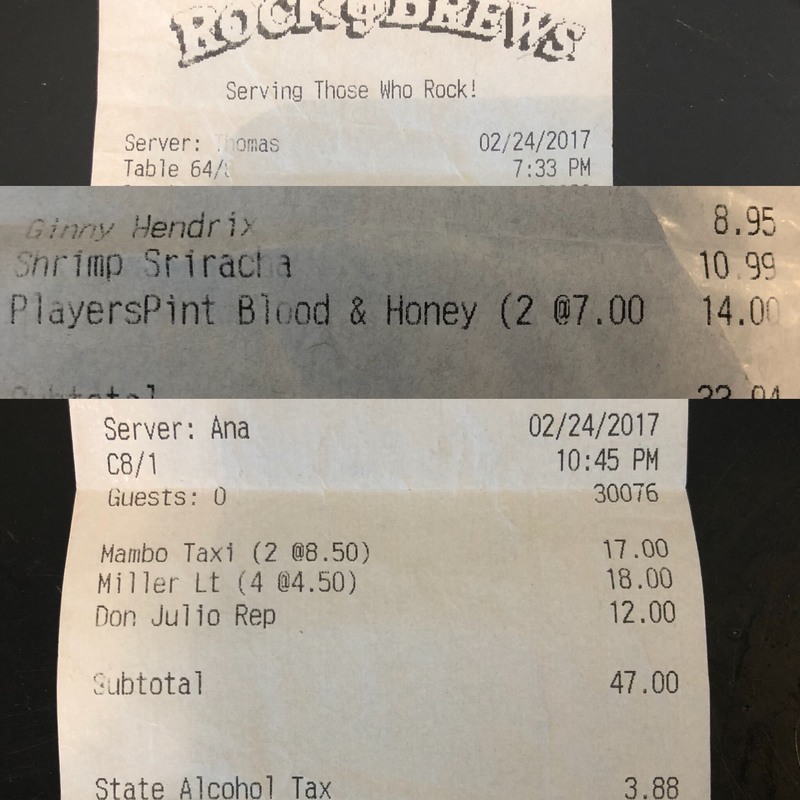 Thursday, March 28, 2018
Read the Probation Story Prelude to get caught up....
... are you caught up?... okay, so here's what had happened...
My friend Katie invited me to a happy hour at a place called Rock & Brews on a Friday in late February, 2017. I was staying at my sister’s house in Plano at the time which is close to that restaurant so I thought it would be good times to meet Katie and her group over there.
Earlier that week I scored some blow downtown. I did most of it when I got it but still had about half a small bag left. I started to leave it at my apartment downtown but I didn’t. I buried it in my wallet and forgot about it.
As you can see from the top tab above I had a few drinks at happy hour. But then as quick as it began it was over. As the group started to disperse, I had a good buzz going and wasn't ready to go home just yet. Katie offered to take me back to her place at that time, which hindsight being 20/20 would have been a GREAT idea. But I liked the vibe at Rock & Brews and decided I'd rather stay there a while longer.
I went outside to get some air and noticed a Mi Cocina across the street. I thought to myself "Oh, man, a Mambo Taxi sounds perfect right about now!"  So I went across the street and had a few more drinks. It was the few more at Mi Cocina that did me in. If you’ve ever had a Mambo Taxi from Mi Cocina you know they’re VERY strong. They call it a Mambo Taxi because you have to call a taxi after you have one. I had 2 Mambo Taxis, four beers AND a shot. And that was AFTER drinking at Rock & Brews. Needless to say, I was hammered.
But I didn’t stop there. I stumbled back over to Rock & Brews where I started and watched a band play for a while. And that's when I remembered I had coke in my wallet. So I went to the bathroom and did a little bump thinking it would help me off my drunk a little. It didn’t. I was too far gone on tequila.
Finally it was nearing closing time so I went outside to get an Uber home but I was so drunk I apparently climbed in the passengers side of some random guy’s truck. I have zero memory of this. The guy called 911 not because I got in his truck, but because he was afraid for my safety. Hell, I can’t blame him.
The cops came and long story short, I got to spend a night at the greybar hotel on an initial public intoxication charge. By the by, the Colony has a nice jail if you have to go.
When we got to jail they told me I need to tell them if I have anything on me because if I take it into the jail the penalty is worse. So I fessed up and told the officer I had drugs in my wallet.
And bing, bang, bong, I’m a felon.
Tune in again next time when Nick calls his dad to bail him out.
--
Nick Druga II
http://nicksilly.com/
469-600-9448